We were at The Lakes Comic Art Fest in Kendal last weekend, which I've blogged about over on the Factor Fiction site.

I'm cancelling this year's MCR, as I was struggling to organise it and my Asthma+ME have flared-up, leaving me struggling to get tot he day job, let alone fo anything else.

MCR options would be to try for a Spring 2015 one or A Winter 2015 (organised much further in advance!).

Jay & I will be at Thought Bubble if anyone wants to meet-up - let us know.

I'm doing a local nbook signing for To End All Wars at the University of Leicester bookshop at 3pm on 2nd Dec.

Trying to decide what to do for my 40th birthday in February (the original plan when we were planning Jay's 40th seven years ago was a trip to New York, but there be no money for that). Ideas so far:

My One Thing To Do Today was to blog the To End All Wars Nottingham book launch over on the Factor Fiction site.

We'll be at ICE (Brum Comic expo) tomorrow for a few hours, so might see some comicsy people there.

Yesterday's One Thing To Do was to go and speak at the Nottingham launch of To End All Wars, which was fabulous and I will blog about separately.

Today's One Thing To Do is to rest, as the launch took ti out of me. Though we are off to the cinema later to see Guardians of the Galaxy, which should be fun.

The Saturday before last we were over in Derby for Edge-Lit 3 sf&f&horror literature convention.

It's a small, but fun con organised by Alex Davis and his merry band of red-shirts.

As I'd been ill we had a pretty quiet con and left fairly early, but while we were there we:

- Bumped into lots of friends like Mark West, Jan Edwards, Peter Coleborn, Chris Teague, Mike Chinn, Richard Farren-Barber, Theresa Derwin and Kim Lakin-Smith, among others. Some of the usual suspects were missing as it was also Harrogate crime festival on the same weekend.

- Went to the launch of hardback, special edition of The Electric by Andrew David Barker (also available as an ebook). Andrew did a good reading and the concept of the book sounds cool, as it revolves around an old cinema and ghosts making films for other ghosts!

- Saw Theresa Derwin having her hair shaved off for breast cancer care. She raised over £500 overall and we also picked up some books in her mini charity auction. Unfortunately the shaver ran out of charge partway through and I went on a hunt for scissors for her - kindly provided by Murky Depths' Terry Martin. 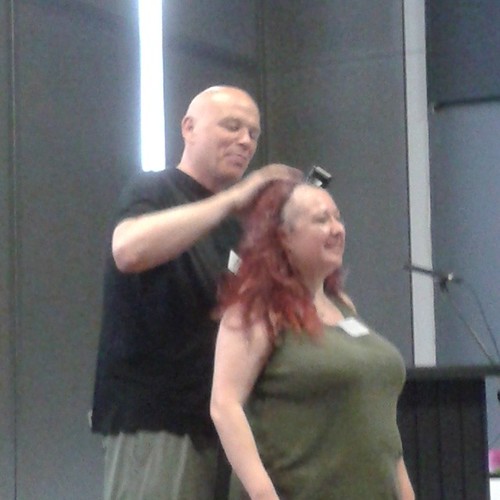 - Went to the GoH talk by Charles Stross. Very interesting talk. I've read Halting State, but after the talk decided I really wanted to read The Laundry File books.

- Went to a lovely workshop by Tricia Sullivan about keeping on writing. It was mainly a free flowing chat where we all said the types of problems we had with writing e.g. motivation, fear of starting or finishing, lack of time/energy etc and then Tricia suggested some tools and techniques that had worked for her. We even did a five minute writing exercise just to prove we could all write anywhere as long as we trained ourselves to do so, and were ready/prepared to do so. Tricia also suggested reading The Right to Write by Julia Cameron for further techniques, so that's going on my summer reading list. I also really enjoyed reading the Tricia's preview chapbook for her new novel Shadow Boxer.

- We rounded off the evening, as is traditional, with the Edge-Lit raffle, amusingly hosted by Joe Abercrombie. Alas, we didn't win anything but had quite enough swag to keep us going.... 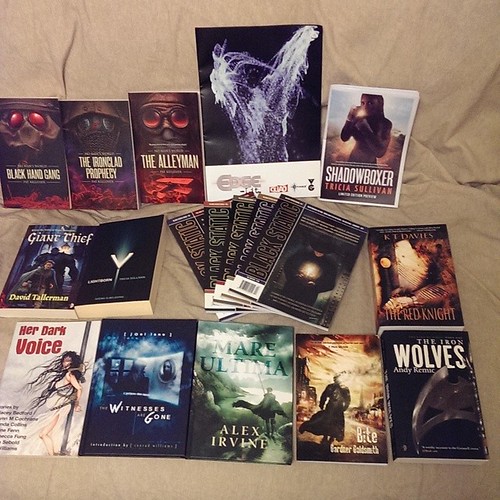 My One Thing To Do Today ended-up being to pick blackberries, as Jay attacked the garden at the weekend and revealed a load of brambles with ripe fruit. 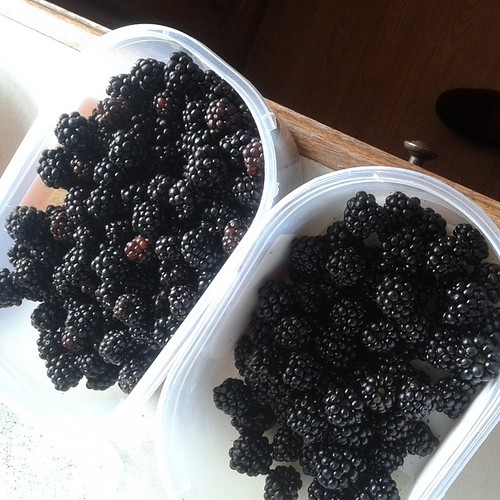 Now I just have to find an easy recipe to use them in. Suggestions welcome. I already made a mixed berry crumble on Sunday.

And this is what I was doing at work this morning... I do spend a lot of time teaching & supporting bibliographic software... 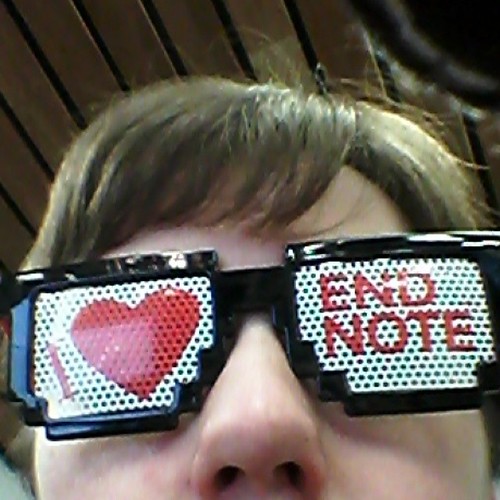 I'm also conserving energy to go out for ice-cream with colleagues later.

I decided that my One Thing To Do Today would be a quick blog about making my comic - newspaper strip skirt.

I'd seen the material back in early May in a local Leicester fabric shop, but didn't buy any. My head kept saying it would make a nice skirt, so I ended-up going back a  week later to buy some. Lesson - just buy the fabric when I see it (if I can afford it)!

I used this really simple tutorial on how to make an A Line skirt from The High Tea Cast - it just requires an existing skirt to use as cutting pattern, material, sewing machine and zip. I put my zip in a side seam rather than add another seam down the back, as I didn't want to break up the pattern on the material. 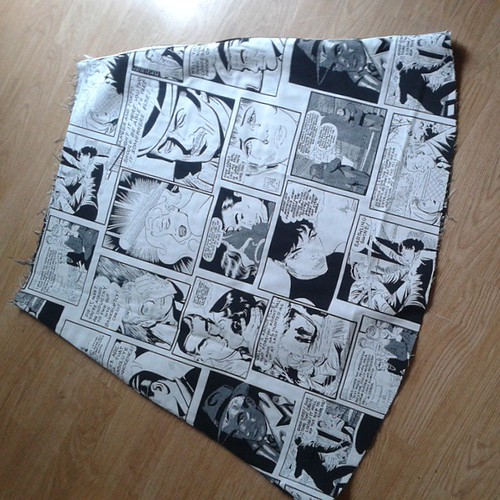 Skirt in progress - including sewing my first zip. 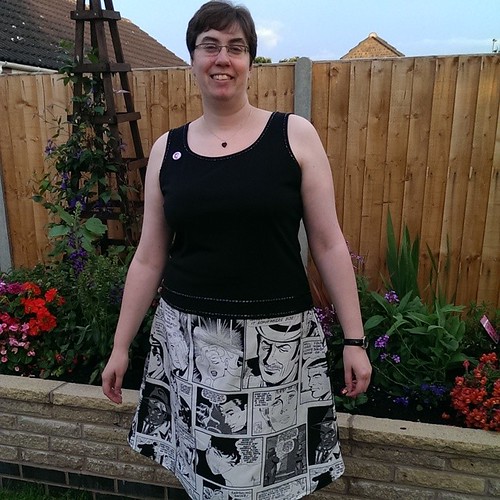 The finished skirt - people kept trying to read it!

Alas, there isn't actually a story in the pattern, just random panels from different strips, but I'm really happy with how it looks.

I recognise one of the panels as being Modesty Blaise, but don't recognise any of the others. Let me know if you do....

This weekend (and next week) is going to heavily feature reading. The judging deadline for the British Fantasy Awards is fast approaching, so as one of the Judges for the BFS Fantasy Novel Award I need to get myself organised.

Finish reading the last of the nominations, refresh my memory on all the nominations and put my thoughts in order. Being involved in the judging so far has been interesting and it will be intriguing to hear my fellow judges thoughts on the books we've read.

I also need to refresh my memory on some of finer points of WW1 history relating to my story 'Go Home And Sit Still' ready for the To End All Wars talk and launch on Wednesday.

After that I'd like to just do some reading for pleasure and was inspired by one of Michael Nobbs' One Thing Today podcasts to think about making a summer reading list like we did at school.

I think I have plenty to choose from (just a few of the piles of books...) 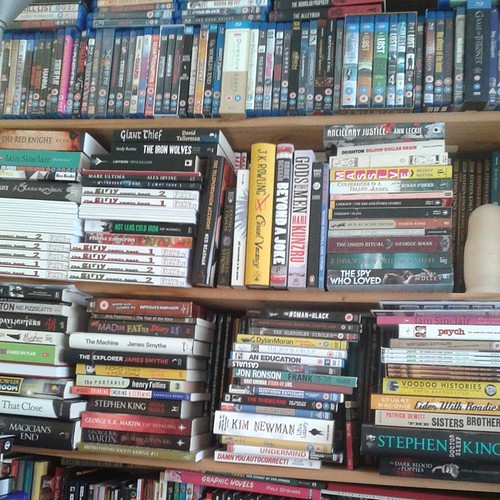 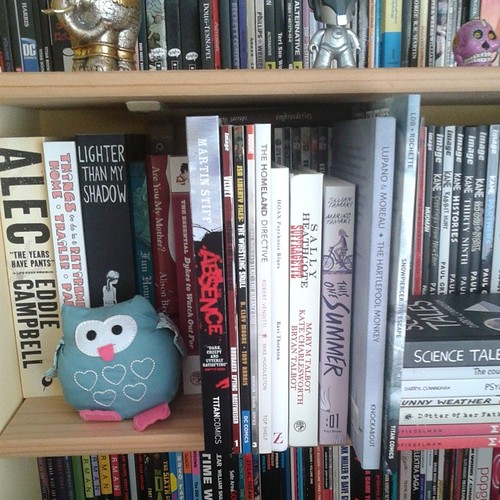 I was helping out at the Electronic Theses & Dissertation Conference today at work, so worked a bit later than normal.

That combined with food shopping, picking Jay up and the car battery dying (err, think 'cause I'd had the aircon on while waiting for Jay) means my One Thing for Today and probably for tomorrow too is to rest. If I feel like blogging I might, but otherwise  won't be pushing myself.

I was also playing keep out of the sunlight today, as the antibiotics I'm on have a big warning about staying out of strong/direct sunlight to avoid bad skin reactions!

Yesterday's One Thing To Do was to work on my mini-presentation for the To End All Wars book launch at Five Leaves Bookshop in Nottingham next Wednesday.

I did a couple of slide, but then heard the others had quite a few more slides each, so I decided my One Thing To Do Today was to add a couple more slides to my presentation.

Health issues ruled out even doing One Thing yesterday.

Today's One Thing To Do was to create some slides for the To End All Wars launch in Nottingham next week. Several contirbutors (including me) are doing little five minute presentations on their strips and/or the challenges of working on a WW1 graphic anthology.
Collapse